What is Multi-layer Co-extrusion? 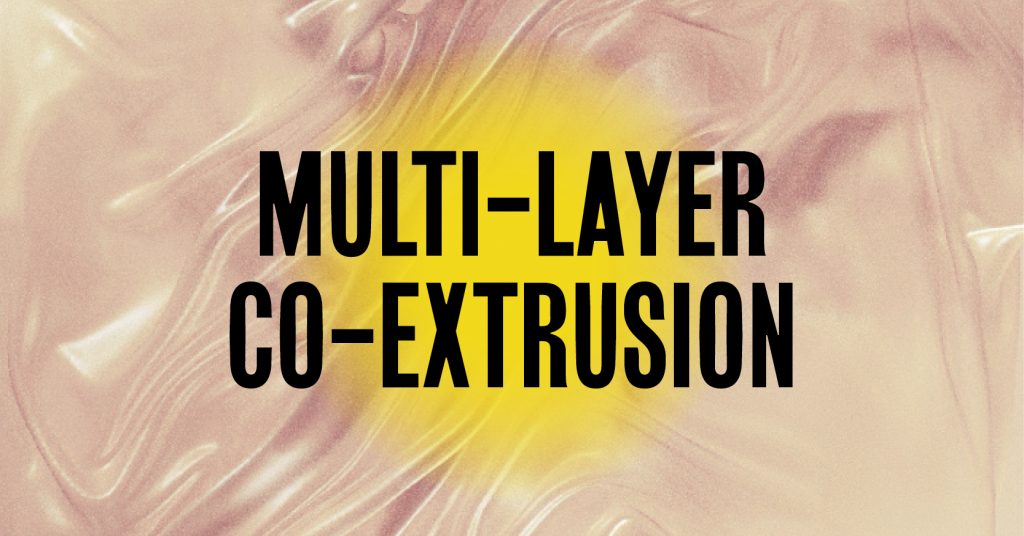 Co-extruded multi-layer film is produced using a compound molding technique that simultaneously extrudes thermoplastic resin, through multiple extruders, and passing through a single die to build up layers of melted resin both on the inside and outside of a film. Extremely thin layers of resin cannot be made into a film by themselves, but can be combined and layered through the co-extrusion process. As a result, several technical/mechanical functions and textures can be combined in a single film.

Multi-layer co-extrusion, using 5,7,9,11 layers is more than a trend and helps address many of the challenges faced in producing mono-material packaging for the circular economy.

Over many years, film manufacturing has evolved from mono to multi-layer films for a variety of reasons. Technological advancement, equipment development, computer processing speeds, process development, polymer chemistry, economic forces and market needs have shaped what we understand as co-extrusion today.

Monolayer films have traditionally been used for simple applications such as agricultural, construction and garment bag films.

Meanwhile, three and five-layer films have been common for many years and are regularly used in several packaging applications around the world – either as standalone films or as part of a mixed lamination structure. Film structures such as those shown in Figures 1A & 1B are commonly used for food and non-food packaging – either as they are, or as mixed laminations with oriented films. 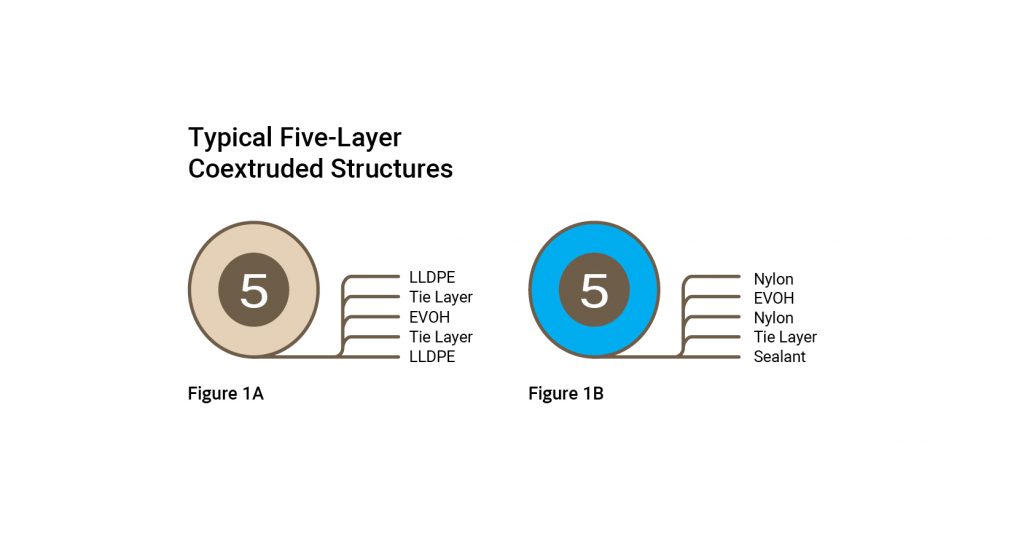 As we transition to mono-material applications, 7,9,11 multi-layer films allow us to combine single polymer groups, excluding less recyclable elements such as nylon to ensure ease of recycling without compromise to technical performance.

All films offer certain properties that make them desirable for various end uses.

Historically, the bulk of co-extrusion equipment has been for three-layer lines. Market share for these has fallen from about 75% in the year 2000 to about 50% today. Increasing market demand has seen a trend to purchase equipment capable of co-extruding, 5,7, 9,11 multilayer films.

There are many benefits to multilayer films, especially as we transition to mono-material applications that support the ease of recycling:

The importance of barrier properties

Numerous benefits come from 7/9/11-layer co-extrusion, but the one Cyclpac are focused on is barrier properties.

Multilayer co-extrusion enables a thin layer of EVOH to be incorporated into the given structure, providing excellent oxygen permeability. Elasticity ratios show that thinner layers of material are more flexible than thicker layers, so improved gelbo flex resistance is achieved with thinner layers of stiff materials such as EVOH.

When used in appropriate proportions EVOH can be recycled as part of mono-material (single polymer) structure.

As better machinery allows for more and more layers to be co-extruded, more and more properties and uses of blown film are being discovered.

Multilayer co-extrusion provides the option to embed or sandwich in between, a lower cost material or – more critically – post-industrial or post-consumer recycled (PCR) content in the layers. Cost is positively impacted but inclusion of PCR increases ease of recycling and facilitates the demand for circular soft plastics. 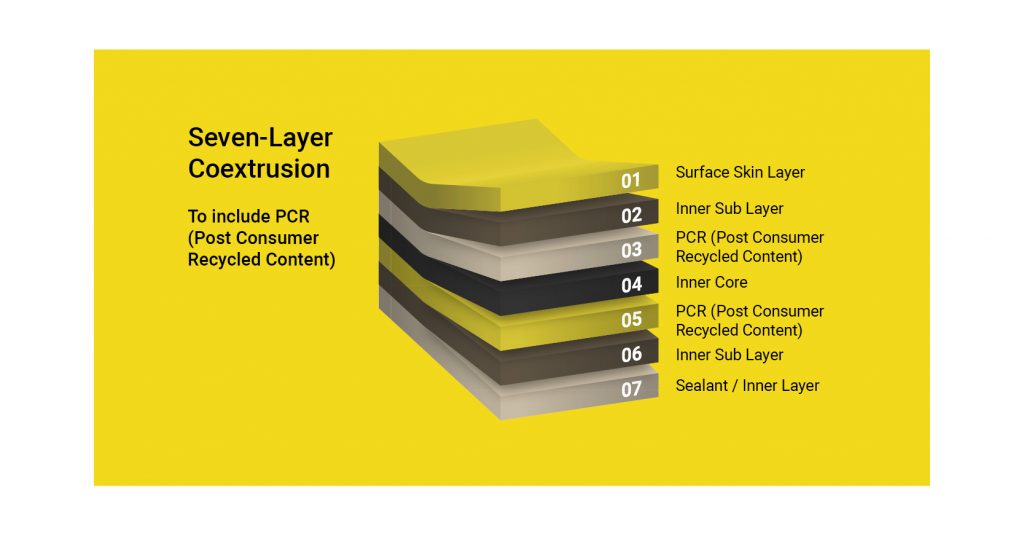 Five-layer structures are limited in their performance and cost savings. The structure shown previously in Figure 1A is an LLDPE/Tie/EVOH/Tie/LLDPE structure.

A seven-layer structure can use a lower-cost LLDPE in the second layer and an expensive, high-performance metallocene LLDPE as the skin layer, which has superior hot tack and heat seal properties.

The structure in Figure 2 is mLLDPE/LLDPE/Tie/EVOH/Tie/LLDPE/mLLDPE. It optimises performance and cost, supports downgauging (material reduction) and is recyclable as a single polymer structure (mono-material) with a concentration of 90% PE. 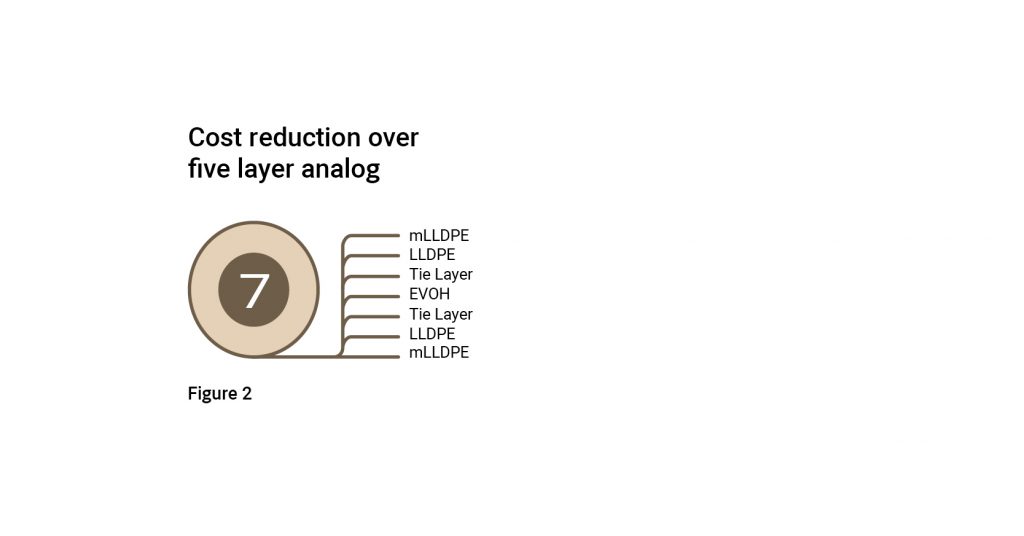 If improved barrier properties and toughness are required, an LLDPE/Tie/Nylon/EVOH/Nylon/Tie/mLLDPE structure can be made with a seven-layer die, shown in Figure 3B.

This structure is used as a lidding film with excellent barrier properties and gloss. If ethylene vinyl acetate (EVA) is substituted for the mLLDPE layer in this previous structure, the film could be used as a thermo-formable tray, shown in Figure 3A.

With more layers, the packaging designer has more options to build viable yet responsible structures to service the ever-increasing demands of product manufactures and retailers. 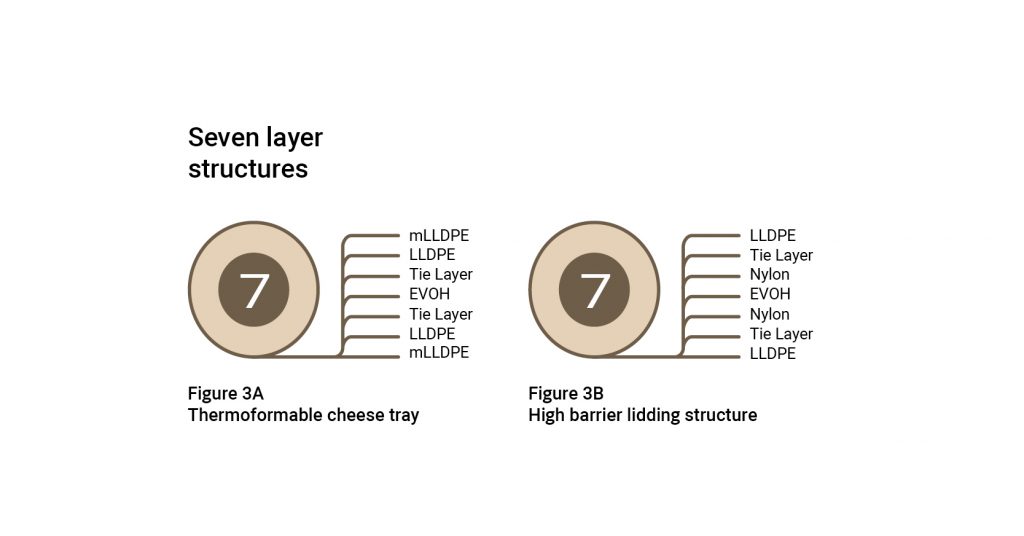 Alternative polymer solutions and material combinations are available to replace nylon and EVA in these types of structures.

Ongoing developments of resins specifically designed to support ease of recycling while retaining similar technical and mechanical properties are ready and available. They can replace established combinations, removing less recyclable elements such as nylon.

All packaging must perform its primary function: to protect, preserve, extend and communicate. We should build structures with end of life at the forefront of our thinking and focus on capability to reduce, reuse, recycle, and rethink! 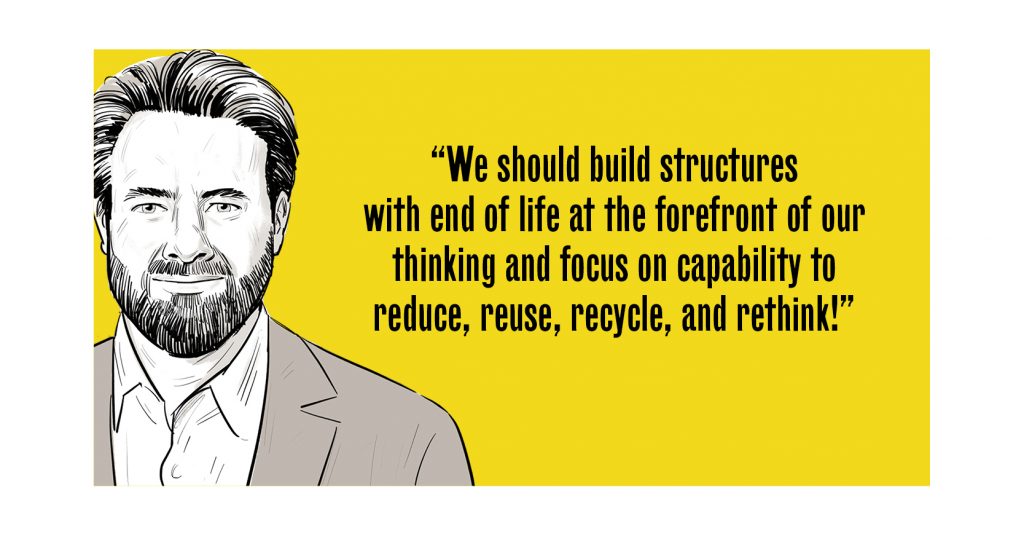 Multi-Layer co-extrusion (7, 9, 11 layers) is an environmentally more friendly solution to the alternatives such as vacuum & ‘metallisers’, adhesive laminators and extrusion laminators. Together these processes can produce any combination of bulk layers, barrier layers, adhesives, and sealants to satisfy market demand, but they do not constitute the future.

Combining these solutions into one process through multi-layer co-extrusion, harnessing the latest technologies and polymer combinations designed specifically for this process is the direction we need to be travelling. This in turn supports mono-material advancement in both PE & PP single polymer types as we transition towards a closed loop circular economy.
Are you ready to ‘rethink’ your packaging?

Whether it’s talking through viable alternatives or a full packaging audit, get in touch to start the conversation.